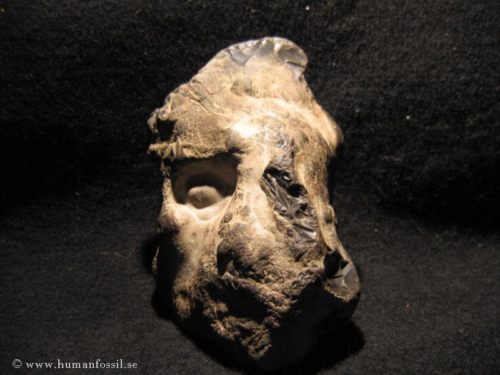 This flint stone from the Swedish westcoast

can’t give the impression of being nothing

else than a detailed human head.

This is extraordinary because we more than

less supposed to be apes three million years ago.

Flint(silex)were developed during the Cretaceous period 65-140 million years ago.

(according to the evolution therory)

glassy characteristics and are not suitable

Flint is often embedded in a thin layer of chalk.

Look at the clear boundary between the white chalk and the dark inside on the divided flint.

The stone itself shows that it is impossible that it is a sculpture since the white layer is utmost thin and the smallest attempt to carve would do so that the dark material inside in the flint become visible.

All the deepest parts on the ”Fossil Faced Man” are white and the dark flint is only visible there it have been damaged. 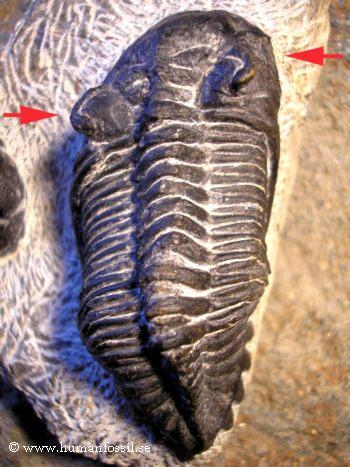 Trilobites are expected to be bilaterally symmetric in their original shape.

head at the same height as the left one.

forgotten in the heat of the sun.

The deformation depends on the directions of the pressures in the strata before it had the chance to solidify. 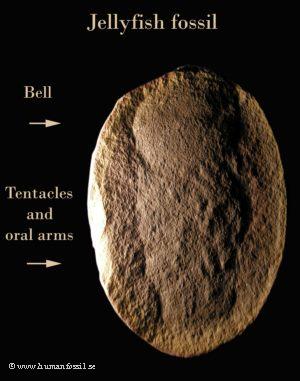 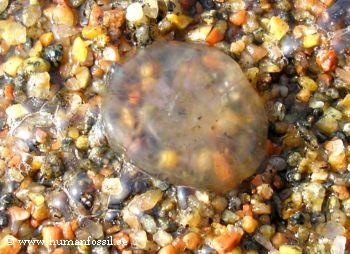 A general opinion is that the jellyfish consider being exquisitely rare to be fossilized.

It’s just not common for soft tissues to be preserved.

I think the expression “exquisitely rare” is an exaggeration.

In Australia it happen to be an area, about three hundred miles big, where you can find millions of fossilized jellyfishes.

In my opinion it has to be a question of a couple of days.

The impression of the jellyfish has

to be created through a fast process, and without leaving any trace of disintegration.

According to the evolution theory disintegrated bacteria suppose to be

the first form of life that came into existence 3, 8 billion years ago.

Back to main page 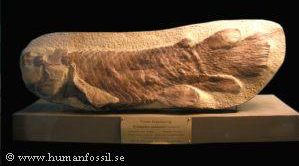 Fossilized Coelacanth with preserved outlines of soft parts displayed in a Museum of Natural History.

The coelacanth left a cavity in a rock that got filled in by other minerals.