One day you're blessed with the greatest gift of all,

the fruit of love: life.

You experience mixed emotions like curiosity, excitement and expectation while you're searching greedily the shelves of the library for books on biology and pregnancy.

You are wondering how the embryo is being developed, how it's growing inside the uterus and what it looks like.

The pictures of embryos and fetuses from biological literature have been so well known to us since school, and at a closer reading on the creation of life in the womb not only did we find out that the fetus should be a boy or a girl but also that it initially would turn into something fishlike with tail and gills in order to develop into something similar to a batrachian. 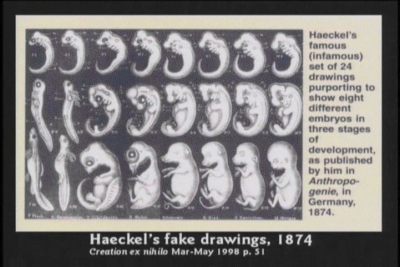 These dominating pictures were regarded a proof of the evolutionary theory that the embryo goes through the same phases of development as the human species once did. The same goes for fetuses of other animals such as pig, turtle, fish and batrachian which developed from the same origin. For there was a striking resemblance in the way embryos of different kinds of species looked at the beginning of their development until they were separated at the end by evolving differently 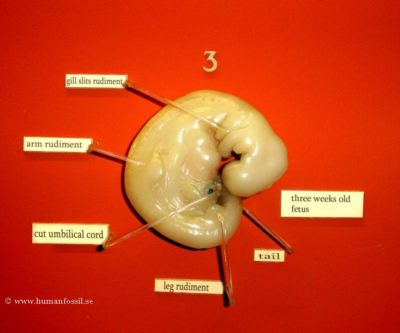 How wonderful to be the proud father of a fish!

Me and the child's mother used to joke around a lot about that; wonder if the baby is a batrachian or a reptile yet?

When it has become a monkey you'd better eat a lot of bananas in order for him to grow properly, because we don't want our son to have problems in school.

So we joked, half buried in science books. 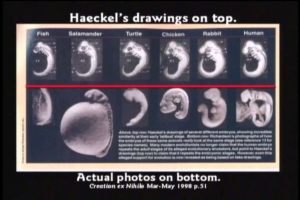 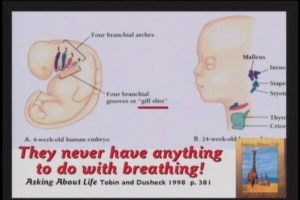 Should our ethics really be based upon scientific fraud,

that in its turn should put a price tag on human life?

despite the fact that they have been proved to be false for over 130 years? 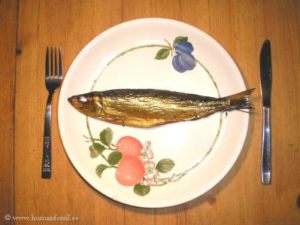 The yolk sac provides reptile fetus with nutrition, while the human fetus "yolk sac" produces blood because the parting marrow have not developed yet. 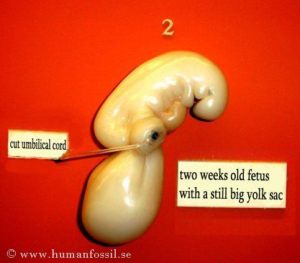 Not until years later did we find out the truth through

The theory of the fetus repeating the phases of the species throughout the evolution was made famous by E. Haeckel in 1866, but his pictures which were claimed to prove the theory just mentioned, were found false already in 1875.

Ernst Haeckel (1834-1919) was a well known Darwinist zoologist , who advocated that handicapped infants should be killed in order to keep the German race clean and to speed up the progression.

Click for more by Richard Weikart Professor of History

Oh, what a fool I felt, so deceived that the only excuse for believing the fairy-tale and hoax was that the miracle was so much bigger than the lie.

It's a good thing you had never considered an abortion, when it's so much harder to have an extinguished human life on your conscience in comparison to a fish or a frog.

Some people look upon the matter differently.

For instance vegans who regard it as impossible to eat living creatures, and some of them use Haeckel´s pictures as a reversed illustration of how it would be sheer cannibalism to eat fish. With the evolutionary theory in mind, it would in fact be like eating human fetuses.